Go Biking in Sequim This Summer 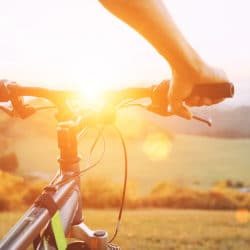 The most popular biking trail in Sequim is the Olympic Discovery Trail, Washington’s premier destination for biking in the Pacific Northwest. The trail begins in the neighboring town of Port Townsend and ends on the shores of the Pacific Ocean west of Forks. It’s an unbelievably beautiful trail, offering vistas of the snow-capped Olympic Mountains, ocean vistas, rivers, and lakes. In total, the trail offers 130 miles of scenic biking trail. It’s majestic beauty simply can’t be matched anywhere else, and part it runs right through our town of Sequim.

The east-central segment of the Olympic Discovery biking trail is the portion of the trail that passes through Sequim. It starts in Blynn, and ends 26.4 miles later in downtown Port Angeles. There are 9 bridges along this portion of the trail, four of which are large restored train-trestles that date back to 1914-15. This includes the beautiful Railroad Bridge Park in Sequim, home to the Audubon center and a 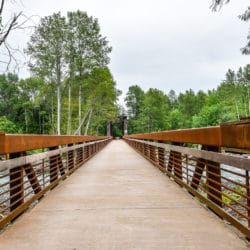 number of wildlife exhibits.  It’s a great place to hop off the trail for a little break. This section of the trail is relatively flat, with only gentle sloping portions and easy rides. Along this part of the trail, riders will enjoy farmland, prairies, rivers, and creeks, and plenty of rural countryside.  Eventually, it ends at the Port Angeles City Pier.

There’s more biking in Sequim than just the Olympic Discovery Trail, though. In May 2014, Sequim was named a Bicycle Friendly Community by the League of American Bicyclists. Sequim’s rural country roads also make for beautiful days on a bike. Olympic Peninsula Cycling has a number of routes near Sequim highlighted. If mountain biking is more your speed, then head to the Olympic National Forest, which has a number of roads perfect for adventure-seeking cyclists.  The Burnt  Hill Trail is also a great ride for mountain bikers.  It is accessible from Happy Valley Road, south of Sequim.

When your legs can’t take anymore, put your feet up and rest at the Dungeness Bay Cottages.  You’ll enjoy exceptional views from our private beach, and will wake refreshed and ready to tackle another day in the Sequim area. Book your room today.

This Amazing View Is Waiting For You!

MIDWEEK RATES STAY AND SAVE

Now is a great time to get away to Sequim and the Olympic Peninsula.  Stay with us midweek for great rates.